Star Anise is frequently used as an exotic spice in Indian as well as in Chinese cuisines. Because of its strong, delightful fragrance, it is mostly used in biryanis, chicken, sea food and other vegetarian dishes. 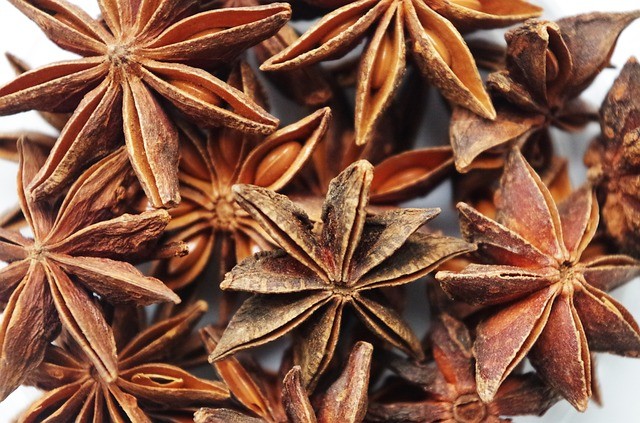 Apart from being a popular spice used in various Asian cuisines, Star Anise is well known for its health benefits. It is mostly used for handling digestive ailments. The regular use of the spice in spice mixes helps in keeping the digestive system healthy. Besides, it also comes with a healthy dose of Vitamin C, which helps in reducing coughs and colds. Then, check the benefits of Star Anise for health.

Benefits of Star Anise for Respiratory Infections: More specifically, Star Anise helps in supporting respiratory health, so if you have a cough or sore throat, or feel the early stirrings of the flu, a cup of anise tea may be able to sort out the inflammation rapidly, and neutralize the underlying infection before more serious symptoms arise.

Benefits of Star Anise for Help Prevent Constipation: Though  Star Anise is used as a spice, and rarely used in high quantities, it has significantly amounts of fiber in it that can be of benefit to anyone. You are likely to use only a little in your food, but when it comes to fiber, every little bit counts. Fiber bulks in the colon and along the intestinal tract, attracting water and preventing fecal statis. Fecal statis is just a fancy way of saying constipation, since the feces are unable to move anymore and harden and become difficult to pass. Water and fiber are essential for prevention of this.

Benefits of Star Anise for Women’s Healt: The Star Anise has traditionally been used in China to help women during pregnancy and to new mothers wanting to increase their milk production. Traditional Chinese practitioners often prescribe it for pregnant women.

It is used to bolster their immune system and stave off illness during this important time. Researchers have also found that Star anise had an estrogenic effect owing to a compound called anethole which helps to modulate hormonal functions in women.

Benefits of Star Anise as Insecticide: Anise essential oil is an effective insecticide that helps keep mosquitoes and houseflies at bay. The essential oil is poisonous to most of these insects, and this is why anise oil finds its use in the production of fumigants, sprays and vaporizers

Benefits of Star Anise for Immune System: The antibacterial effects of Star Anise are widely researched and well known, and this spice has been used to treat bacterial infections of the stomach and other parts of the body for centuries. Perhaps most importantly, this spice appears to be effective against several antibiotic-resistant bacterial strains, making it very valuable to the pharmaceutical industry.

Benefits of Star Anise as Expectorant: Anise essential oil is an effective expectorant, which helps loosen mucus and phlegm. This property makes anise oil an effective expectorant that can help relieve conditions like cold and congestion. You can use anise essential oil to treat congestion, cough, bronchitis asthma and other respiratory conditions like breathlessness. This property stems from anise seeds’ ability to loosen the phlegm

Benefits of Star Anise for Rheumatism And Joint Pain: When applied topically, Star Anise essential oil is an excellent treatment for rheumatism and back pain. Before using the essential oil it should be combined with a carrier oil and massaged into the affected areas. 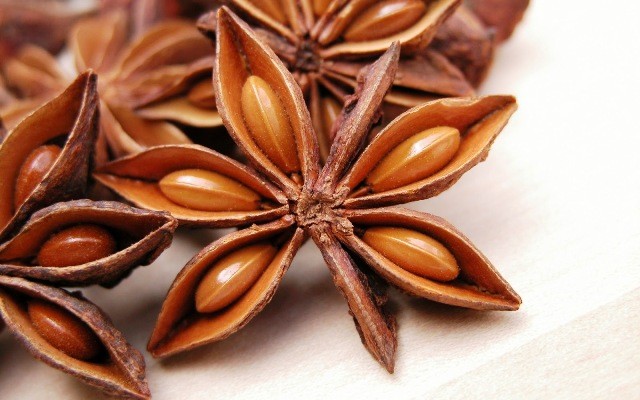 Benefits Of Aniseeds for Hair: Aniseed oil is used for oiling the hair. It has proven its usefulness in hair regrowth. It also helps in repairing the damaged hair. If aniseed oil is massaged well into the scalp, it aids the growth of new hair. It gives relief from dandruff and flakes, which usually occur in those with a dry scalp. Aniseed oil has antiseptic and antimicrobial properties, which aid in the eradication of scalp infections. It helps to get rid of head lice as well. It is the best treatment for scabies, flakes, and lice.

Benefits of Star Anise for Fungal Infections: Most notably, this spice has powerful anti-fungal properties, and has been a trusted natural remedy for a huge host of fungal infections, including Athlete’s foot, ringworm, Candida and other common strains. While most fungal infections are relatively harmless, a regular dosage of Star Anise tea can give your immune system the necessary boost against these pathogens.

Star Anise Acts As A Mosquito Repellant When Ingested: Studies have shown that a compound found in star anise, anethole, functions as an effective insecticide outside of the body, but also when ingested. This is unique, since many repellants require application to the skin to work, but consumption of Star Anise helps you from getting bitten by mosquitoes and other insects, as it has insecticide properties. Regular consumption of Star Anise hence makes you insect proof, a welcome addition in tropical climates that have to suffer from insect bites year round.

Benefits of Star Anise for Sleep Disorders: According to traditional use and anecdotal evidence, Star Anise may have mild sedative properties which can help your nerves to settle down and also ensure a good night’s sleep. If you are having difficulty getting to sleep, try a cup of soothing Star Anise tea before going to bed.

Benefit of Star Anise for Coughs: The Star Anise tea is an excellent natural remedy to ease a cough and soothe your sore throat. Simply follow the tea instructions below and drink up to three times each day.

Benefits of Star Anise for Hormones: The effects of  Star Anise on hormone levels if widely studied, as it can have quite a powerful effect on both men and women. In men, it can provide an energetic boost and increase sex drive, whereas in women it can regulate menstrual cycles, control mood swings and other hormone-driven side effects of menstruation.

Benefit of Star Anise as Anti-bacterial: Anethole is an essential oil in Star Anise which gives it a licorice flavor. It is effective against some types of bacteria. Data published in the February 2002 edition of “Phytotherapy Research” showed the anethole isolated from Star Anise protective against some micro-organisms. Anethole can prevent the growth of Escherichia coli and Staphylococcus aureus. E. coli, spread by contamination of food, primarily affects the digestive system, causing vomiting and diarrhea.

Benefits of Star Anise for Digestion: Star Anise is often prepared as a tea especially in South East Asian countries and China. It is mainly used to deal with a variety of digestive complaints such as gas, abdominal cramps, indigestion, bloating and constipation. To treat any digestive condition that you may be suffering from, it is considered best to drink the tea after your meals. 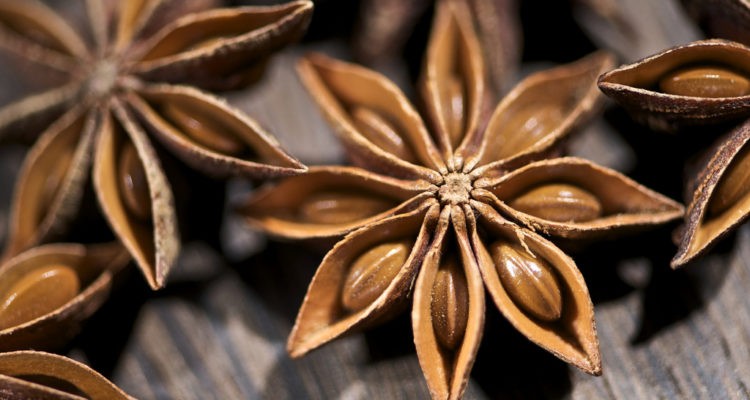 Benefits of Star Anise for Circulation: The most notable mineral found in Star Anise is iron, and a single tablespoon of these small fruiting bodies contains roughly 13% of your daily recommended amount. While eating an entire tablespoon of these fruits is unlikely, the concentration of iron can still help boost red blood cell production, thus increasing energy levels by promoting circulation and proper oxygenation of the body’s extremities.

Benefits of Star Anise for Reduce Cancer Risk: The diverse range of antioxidants in this spice, from quercetin and kaemferol to thymol and coumaric acid, can all affect oxidative stress in the body. By reducing free radical levels and supporting the immune system, there is a lower risk of mutagenic effects in the body, which can lead to cancer cells and tumor formation.

Benefits of Star Anise for Assists In Lactation: New mothers sometimes have a difficult time producing milk following the birth of the newborn, especially if delivered via caesarean section or if it is their first child. At this time, remedies can be used to stimulate milk production. It is believed that the compound anethole shares a structural similarity to dopamine, which is known to inhibit prolactin release (and milk production). So, by dislodging dopamine and preventing it from doing so, milk production is increased.