Proven Health Benefits of Plum that you need know. Moreover, the plum contains properties beneficial for prevent and fight various diseases. The plum is a wonderful, juicy fruit that belongs botanically to the family of Rosaceae. This fruit belongs to the genus Prunus domestica, which also includes peaches, nectarine, and almonds. It is one of the few fruits that come in a panorama of colors. The plant which bears this fruit is a small shrub that is widely grown all across the world, especially in China, United States, Japan, and Europe.

The plum fruits differ in color and size according to the region of origin. The plant bears the plum fruits mostly during the months between May and September. Other local names of plum are ‘Aloo Bukhara‘ in Hindi, ‘Alpagoda Pandu‘ in Telugu, ‘Alpakoda‘ in Tamil and ‘Onagida Draakshe‘ in Kannada. 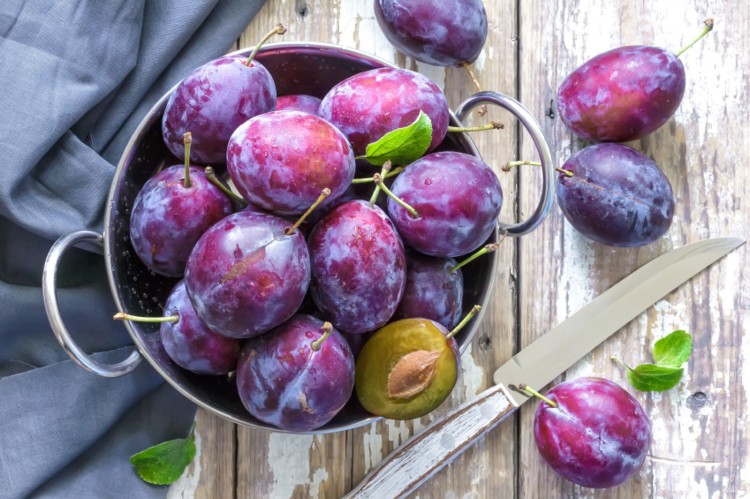 Dried plums are known as prunes. There are around 2000 varieties of plums available in the world, and 100 are available in the United States alone. Though India is not much known for this fruit production, the country grows approximately 12 varieties of plum. Their primary producers are Punjab, Himachal Pradesh and Jammu and Kashmir. It is one of the rarely found fruits in India. Then, check the benefits of plum for health:

Antioxidant Properties: These fruits contain vitamin C and phytonutrients such as lutein, cryptoxanthin, zeaxanthin, neochlorogenic, and chlorogenic acid. These components possess effective antioxidant qualities which help in preventing the damage caused by oxygen radicals called superoxide anion radicals. The phenols present in plums also extend their protective effect on the essential fats in the neurons and cell membranes against any injuries caused by oxidative stress.

Treat Obesity: Plum extracts are valuable for treating obesity and other complications associated with obesity. Studies have shown that consumption of stone fruits such as plums helps in fighting metabolic syndrome, due to the presence of bioactive compounds. The flavonoids and phenolic components such as anthocyanins, chlorogenic acids, quercetin, and catechins present in them exert anti-obesity and anti-inflammatory effects on the cells, including the fat cells, and they also help in preventing obesity-related problems such as cholesterol disorders, diabetes, and cardiovascular diseases.

Control Diabetes: Plums exert anti-hyperglycemic effects and help in combating diabetes. Studies have shown that the consumption of plum extracts aids in the reduction of blood glucose and levels of triglyceride in the body. The flavonoids present in plums exert protective effects against insulin resistance and help to enhance insulin sensitivity in the body.

Prevent Osteoporosis: Consumption of dried plums exerts anabolic and anti-resorptive actions, which aid in maintaining healthy bones. Flavonoids such as caffeic acid and rutin present in plums help in inhibiting the deterioration of bone tissues and prevent diseases such as osteoporosis in postmenopausal women. Polyphenols, along with the potassium content present in dried plums, encourage the formation of bones, improve bone density, and prevent bone loss caused by ovarian hormone deficiency. Research has demonstrated that regular consumption of dried plums helps in the restoration of bone density that has already been lost due to aging.

Aid in Digestion: They are a good source of dietary fiber, along with the components sorbitol and isatin, which help in regulating the digestive system. According to research, dried plums or prunes are more effective in treating digestive disorders such as constipation as compared to other remedies such as psyllium husk. Sorbitol and isatin have a laxative effect and encourage the secretion of fluids in the bowels and promote the efficient flushing of waste through the colon.

Improve Cognition: Studies have shown that the flavonoids present in plum juice are effective in providing protection against age-related cognitive impairment. The beneficial phytonutrients present in plums help in reducing inflammation in the neurological areas to improve learning and memory functions. Regular consumption of plums also helps in preventing age-related neurodegenerative disorders such as Alzheimer’s and Parkinson’s diseases.

Maintain Healthy Nervous System: Plums contain vitamin B6, which helps in the transmission of nerve signals and aids in the smooth functioning of the nervous system. They also help in the normal growth of the brain and assist in the formation of mood influencing hormones. Tryptophan, an amino acid present in them, helps in the production of the neurotransmitter serotonin, which plays an important role in improving sleep, appetite, and concentration.

Treats Digestive Disorders: The compounds sorbitol and isatin, found in plums, help in regulating the functioning of the digestive system and in relieving constipation.

Improves Cardiovascular Health: Plums also help in maintaining the heart health. They contain antioxidants that help to get rid of the free radicals and prevent cholesterol oxidation. Cholesterol oxidation is a threat to healthy blood vessels, which may eventually lead to a number of heart diseases such as heart stroke and high cholesterol. The vitamin C in plums is extremely helpful for controlling heart diseases in diabetic patients.

Natural Laxatives: Both plums and prunes are known to be effective natural laxatives and can help to maintain regular bowel habits.

Improves Blood Circulation: Plum and prunes have the increased ability to absorb iron in the body. This ability is due to the high vitamin C content in this fruit. The iron in the plum is highly required for the formation of red blood cells. It improves the blood circulation in the body and prevents anemia.