Benefits of kiwi for health that you need know. Moreover, the kiwi contains properties beneficial for prevent and fight various diseases. The kiwi fruit, native to northern China, first arrived in New Zealand at the turn of the 20th century; it was then known as the Chinese Gooseberry. When the time came to export the fruit, to avoid the high duties charged on berries, the name was changed to the kiwifruit.

It was nicknamed kiwi fruit because of the shared characteristics with New Zealand’s national symbol, the kiwi bird, which is also small, brown, and fuzzy. kiwi are a nutrient-dense food, meaning that they are high in nutrients and low in calories.

Nutritional Value of kiwi: While we credit apple as the miracle fruit, kiwi too is loaded with essential vitamins and minerals and works in many ways to give you a nutritional boost. Then, check the benefits Kiwi for health:

kiwi High Source of Vitamin C: If you thought that lemons and oranges were the highest sources of Vitamin C, then think again! According to the nutritional break-up of kiwi fruit, per 100 grams contain 154 percentage of Vitamin C, which is almost twice that of lemons and oranges. Vitamin C acts as powerful antioxidant, eliminating free radicals that could cause inflammation or cancer. It also helps in boosting the immunity of the body against harmful pathogens.

Benefits of kiwi Sleep Inducer: Having trouble sleeping? According to a research done by Taipei Medical University, “Numerous studies have revealed that kiwi fruit contains many medicinally useful compounds, among which antioxidants and serotonin may be beneficial in the treatment of sleep disorders.” It is said that having two kiwi fruits one hour before bedtime can help immensely in inducing sleep.

Helps in Digestion: kiwi fruit contains an enzyme known as actinidain which is known for its protein dissolving properties, similar to that of papain in papaya. This is the reason why it is commonly used as a meat tenderiser. Moreover, it helps in the digestion of proteins in the body and is also known to help patients suffering from irritable bowel syndrome.

Good Source of Folate: It is not without reason that the Chinese valued kiwi for its medicinal properties. It is a good source of folate, which is said to be beneficial for pregnant women because it helps in the development of the foetus, making it healthy. It is also considered to be good for growing children.

Beautiful Skin:  kiwi is alkaline in nature, which means it helps in countering the effects of acidic foods that we quite often consume. A healthy body is one which has a good pH balance, which helps in keeping you active, full of energy, and with a youthful skin. The vitamins prevent in kiwi (C and E) are said to be great for the skin as they act as antioxidant, preventing skin degradation. Take a few slices and apply them on your skin for good results.

kiwis Protects Against DNA Damage, Cancer: As mentioned, kiwi fruit is quite rich in vitamin C. Acting as an important water-soluble antioxidant, vitamin C is essential for preventing free radical damage. What’s more, kiwi contains a number of flavonoids and carotenoids responsible for protecting DNA from oxidative stress. The vitamin C content and phytonutrients help to prevent a number of issues related to DNA damage and oxidative stress, including: osteoarthritis, rheumatoid arthritis, asthma, and cancer growth. 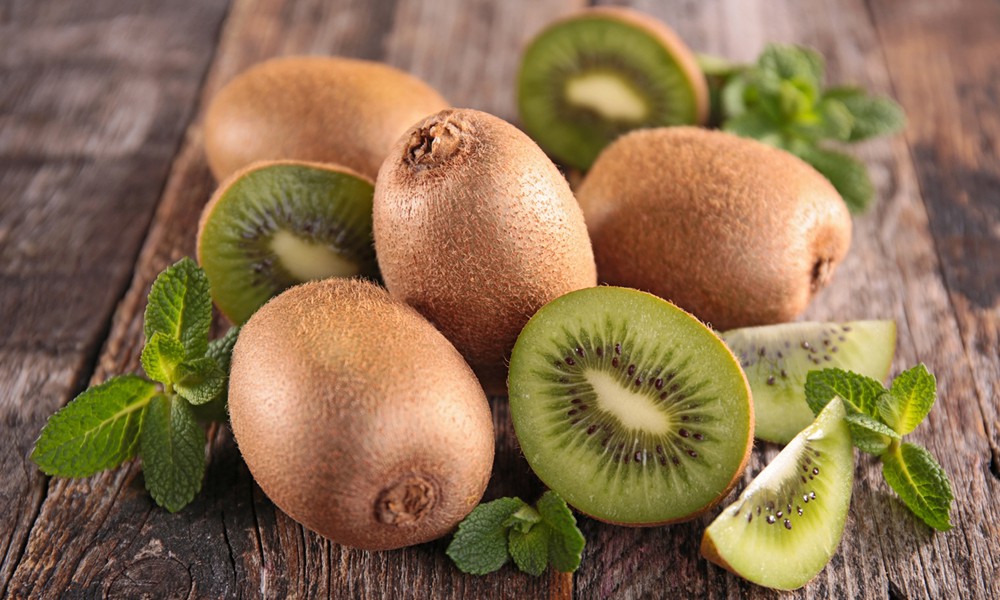 Improve Cardiovascular Health: kiwis are loaded with vitamin C, polyphenols, and are a good source of potassium – all of which work together to reduce the risk of blood clots, protect the blood vessels and heart, and protect the the body from free radicals that cause oxidative stress, which could lead to atherosclerosis (one cause for heart disease). Further, kiwis reduce blood clotting without negative consequence unlike aspirin, which is routinely recommended by doctors to reduce clotting.

Protects from DNA Damage: A study by Collins, Horska and Hotten showed that the unique combination of antioxidants in kiwi helps protect the cell DNA from oxidative damage. Some experts suggest this can help prevent cancer.

Boosts Your Immunity: kiwis high vitamin C content along with other antioxidant compounds has been proven to boost the immune system.

Balances Hormones: Hormonal fluctuation is quite common during pregnancy. One moment you are too emotional, and then suddenly, you become edgy. Depression, tiredness, and stress are not good for you as an expecting mom. Eat a serving of kiwi fruit to keep these problems at bay.

10 Benefits of Acai For Health